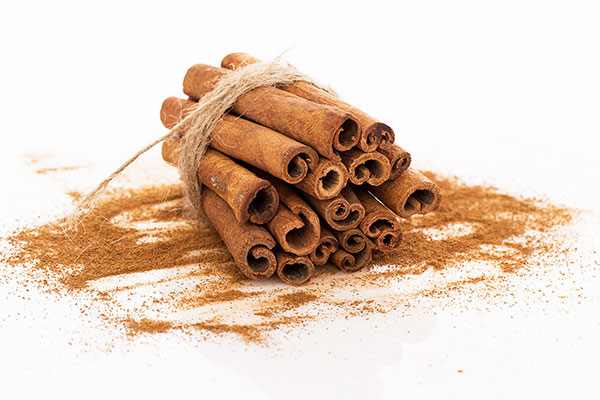 Cinnamon, an aromatic spice, comes from the inner bark of tropical evergreen trees. These are native to South East Asia, but are now produced in many countries. The most commonly used type of cinnamon is “cassia cinnamon,” which is made from the inner bark of the Chinese cinnamon tree (Cinnamomum aromaticum). It is the dried inner bark of the tree which is exported from China and Vietnam. Cassia has a coarser texture than Ceylon Cinnamon or True Cinnamon (Cinnamomum zeylanicum). The bark is harvested and dried, then ground into a powder that can be stored for years.

Cinnamon is an excellent source of manganese and dietary fiber. It also contains iron, calcium, potassium, zinc, selenium and magnesium. The major components responsible for the strong flavor and aroma are cinnamic aldehyde, coumarin and eugenol.

Cinnamon has been used for centuries as a culinary ingredient in savory and sweet foods, including breads and cakes, as well as for its medicinal properties. It contains essential oils, phenolic compounds and antioxidants, which may explain its reported health benefits. It is high in antioxidants that fight free radicals and help prevent cell damage. Cinnamon may also help lower blood sugar levels, improve cholesterol levels and reduce symptoms of diarrhea. Cinnamon contains no carbohydrates, fat or protein. When eaten in moderation, cinnamon is safe for most people with diabetes. It may also lower blood sugar levels, protect against heart disease and cancer, aid digestion and promote weight loss.

Cinnamon has been used for its medicinal value since ancient times and has been found in Egyptian tombs dating back to 2000 BC.