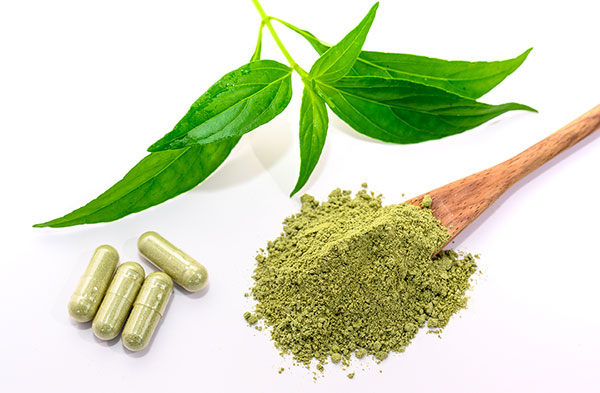 Andrographis paniculata leaves, commonly known as Kalmegh or Kalmegham in Sanskrit, is an Ayurvedic herb. It is an annual plant, native to India and other parts of Asia. The leaves of the plant are harvested for their health benefits. It is used for the treatment of common cold and seasonal allergies.

Andrographis paniculata has been used in traditional medicine since ancient times. It is believed to be effective in treating many illnesses, including respiratory disorders, infections and fever. In traditional Chinese medicine (TCM), the herb has been used to treat infections, inflammation and fever. In Ayurvedic medicine, it is prescribed for liver problems, blood disorders and respiratory diseases.

The leaves of this plant have been found to have a number of uses, including:
1) Treatment for cold and flu symptoms
2) Treatment for fever
3) Treatment for respiratory ailments like asthma, bronchitis and pneumonia
4) Treatment for skin diseases such as eczema, psoriasis and dermatitis
5) Boost immune system

The main compounds found in the Andrographis paniculata leaf include alkaloids, terpenoids and phenolic compounds. The herb contains several active ingredients that have antioxidant properties and can help fight off infections caused by bacteria, viruses or fungi.

The leaves of the plant are dried and ground into powder form, which can be taken as a supplement or added to food or drinks. The leaves are also used to make tea. Some people also use them as tinctures or ointments.

Andrographis paniculata is believed to help boost the immune system by increasing white blood cell levels in the body, which can help fight infections. It may also help relieve pain associated with inflammation caused by inflammation of the joints, muscles or tendons.